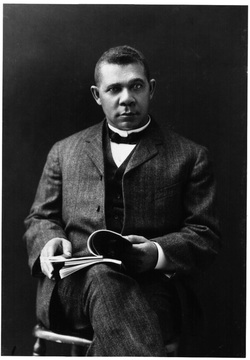 Dr. Booker T. Washington
Lewis Adams and George Campbell brought Booker T. Washington to Macon County to establish what would become the Tuskegee University.  His efforts brought Tuskegee, Macon County and the Black Belt of Alabama, to the attention of the nation.  During his administration, he brought every sitting U.S. President to that rural campus. With the guidance of architect extraodinaire, the former plantation land now featured Greek and Roman architecture and one of the nation's largest non-supported domed space, for it's cafeteria.  This institution now graduates more black veterinarians and black engineers that any other school in the United States of America.

Huntingdon College
The former Women's College, located on South Main Street, in downtown Tuskegee, AL, traversed several name changes, before becoming the now Huntingdon College.  Later it moved to the present location in Montgomery, Alabama.  The only traces of it's legacy in Tuskegee, include a short street just off South Main Street, named College Street, and the founding stone located across from the current Tuskegee Public Elementary School.

Rosenwald Schools
Julius Rosenwald, billionaire of Sears and Robuck Co., was a good friend of Booker T. Washington.  When he asked Washington what he could do to help "colored" people, Washington told him directly.  He said. "I give them a high school and college education, but they also need an elementary education."  With that Rosenwald began an incredible building project to establish elementary or "Rosenwald Schools" across the United States.  By the time the program ended, Rosenwald had built over 4,000 schools for black children, the graduates of whom are legend in their communities and in their service to mankind.  This all began in Macon County, Alabama.

Dr. Deborah Cannon Wolfe
After graduating from Teachers College, Wolfe joined the faculty of Tuskegee Institute in Alabama. During her 12 years there, she established and served as principal of two laboratory schools, worked as a supervising teacher, and headed up the Department of Elementary Education. She received her Ed.D. degree during a leave of absence from Tuskegee Institute. Upon her return, Wolfe became the first female faculty member of the school with an earned doctorate. She founded and served as director of the school’s graduate program in education.

Wolfe left Tuskegee Institute in 1950 to become a faculty member at Queens College, City University of New York at which she taught until her retirement in 1984. Throughout the 1950s and ‘60s, Wolfe also held visiting lecturer positions at Grambling College, New York University, Fordham University, University of Michigan, Teachers College, Texas College, University of Illinois, and Wayne State University. From 1962 to 1965, Wolfe served as Education Chief of the U.S. House of Representatives’ Committee on Education and Labor chaired by Adam Clayton Powell. 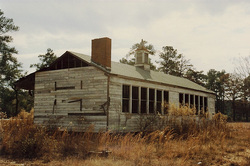 The school, supported by Tuskegee Institute faculty and students, consisted of a five-room building for grades 1-9, along with home economics facilities, a farm shop with tools, a health center equipped for examinations and treatment, a teachers’ cottage, a barn, and a playground.

The school doubled as a community center and a site for evening adult education and vocational classes.